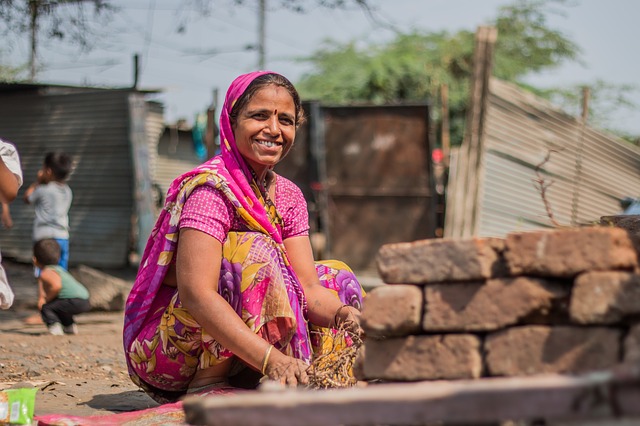 I am lying in a half-open cottage in Kerala, one of the most beautiful places in India. It is April, and I am staying in the sprawling tropical land, in the cover of palm trees, at the shore of the ocean. As it should be in God’s own country, the month of Venus greets us with a pleasantly hot glance. April is watching the heavenly scene with hazy but hot eyes, though not weeping. As cool clouds come from the ocean, and they soothe the passion of April and chase the clouds if its tears towards the nearby mountains.

In the small cottage I can hear the noises of the tropical jungle and the murmur of the ocean that reminds me of the sea as I am Hungarian. An Ayurvedic cure is going on right now. In this phase they are pouring healing oil onto my forehead which has very good effect on the mind. Befuddled by excitement of the outside unknown world and the secrets of the inner world which are even less known, I am trying to balance on the border of the two worlds. I close my eyes, I am listening to the songs of birds which sounds more and more melodic. This, mixed with the mind clearing treatment, paints heavenly pictures on the linen of my imagination.

In the meantime I can hear the therapists whispering and laughing. I think they should not talk as I can see them looking out and when can hear some suspicious sound, they try to chill each other in their specific Malayalam language which consists of words rolling apart. It is very nice that I have met these two kind men. I liked them very much. They talked a lot with me, too and laughed much. The previous day we had good time when they parodied Indian languages. Now their new idea is to sing about Kṛṣṇa, right at the time when I am sailing on the fragile boat of consciousness between the two worlds. The unexpected, unknown but familiar sons make my little boat glide towards remote, attractive worlds with its swelling sails. But during the great sailing a question comes up in my mind.

This question has bothered me most in the last three weeks of our journey. Why are Indian people generally so happy? Before asking them I thought over the situations of the last weeks that led to similar questions.

In India it seems as if everything had turned upside down. Compared to Hungary leastwise – for them obviously this is natural. Here in my country cars are speeding with metal coldness and in silent order but you can often see people shouting or shaking their fists with window closed. In India it is just the opposite. You would think that they are nervous wrecks as there is terrible honking and apparent chaos but the drivers are manoeuvring on the road calmly and unperturbed. The seeming discordance is inseparable part of their everyday life. The volume of the loudspeakers in the street is over the threshold of European people, bells are ringing and people speak with each other so loudly as if they were fighting. But they are only nicely talking and generally they seem to be peaceful. We work the other way. We don’t like environment that is too loud, we prefer peaceful milieu. It might be because of our mind crying inside and two kinds of noises would be too much. We are watching it

It is strange for us but we are also curious to see the Indian people living their everyday life almost publicly. For us the private sphere is very small but for them sometimes it can be miles big. They hide less things. In the streets, in the open yards, in the houses we can see things in India that we prefer to it in our houses, hiding them carefully from curious eyes. We often hide beauty of life and painful, difficult things also. (The family and private problems swept under the carpet, the rubbish heaps of consumer society, slaughter houses…etc.)

From the cavalcade of the strange taste, sounds and simplicity of Indian life only one question evolves after some time: Why do we always have the feeling that these people are happy?

On the first day of our journey in the whirl of Mumbai towards Mahárástra we can see children living and happily playing under bridges. (We personally met a millionaire who used to be a child playing in the street, but it is another story…) Later around the ancient and astonishing cave and cliff temples of Mahárástra we saw poor but happily smiling local people.

Then we flew to the South, the multicultural city, Cochin. We started from here to the mountains of Kerala. In the mountains the real hidden fairytale countryside revealed for us. Endless tea-lands run around the incredibly beautiful ridge. We stayed in the border of a small mountain town, in a hotel above the valleys.

We noticed in the city that there is a mosque, a Christian church and Hindu temple in the hills opposite each other. It seems people here don’t really understand what religious opposition is. At dawn we can hear either Christian chanting which sounds much happier than in Europe, or the sound of Indian bamboo flute flying happily in the breath-taking valleys where in cooperation with the first sun rays they try to wake the sleepy tea-lands which try to hide under the foggy cover.

From the mountains we travel to lagoons of Kerala where we spend one whole day and night on residential boats. The bucket list experience surpassed anything we could have imagined. We were travelling on boats among palm islands, and when we slowed down we could watch the evolving flow of life on earth, water and in the air.

We had our own staff who cooked for us and supplied us with everything we needed. One of them dropped his boat in the water while he was steering the boat. He didn’t curse, he wasn’t annoyed, he only complained sadly that he couldn’t call his family. He was sailing with sad look in his eyes all afternoon. When we offered him some money for the new phone, he was very grateful and happy.

One of our next our stops was Trivandrum. White people are not allowed to enter the ancient Viṣṇu-temple, except devotees of Kṛṣṇa. For some reason they like us very much.

Thus we entered so that the Lord who is lying on the Ocean could see us. Rainclouds were disappearing and the afternoon Sun was curiously sweeping over the ancient carved columns of the temple, heavy silver doors, the elephants leading the procession of the temple, the peaceful devotees, serious priests and musicians playing Vedic musical instruments and the dancers. Perhaps the Sun was also looking for the treasure from the Roman, Greek and earlier times, worth nearly 5 billion dollars (it is not a spelling mistake), which was found in one of the hidden chambers of the temple a few years ago. But the Sun instead “only” found a magic scene that envisioned the ancient Vedic times with people who were apparently happy to see the Lord.

In our apartment which resembled heavenly gardens, in the coast of the Ocean, I was sitting on a rock which was above the sandy beach and I was watching the sunset. Sometimes a young man selling pictures came there. One day I asked him why he appeared so happy. He answered he was satisfied with what he had, he didn’t want more… he only wanted me to buy that picture. I liked the answer but then I thought he had some hidden motivation so I didn’t close the dialogue (I still bought the picture).

After all these, now the question comes up in me, making me forget everything else, just like when I was in the shore of the ocean, resting in the small cottage and listening to the songs of the therapists. The answer comes after thinking for a short time:

“I have suffered so much during my life so I learned: suffering is the mercy of the Lord to make me remember Him. Thus if I come across good or bad things, I can always be grateful to Lord Kṛṣṇa, and this fills me with joy.”

I am lying stunned and speechless, then I remembered the words of the ancient scriptures, the words of the avantī brāhmaṇa. He also saw that the suffering in him is the Lord Himself who came in guise so that he could experience the feeling of His absence and thus led him through material existence. Earlier when I went through great suffering I tried to depend on Kṛṣṇa and think of the words of the avantī brāhmaṇa. Unfortunately however ecstatic the realisation was, however I wanted to keep it alive, when the suffering lessened, the strength of realisation also faded. Unfortunately “good” can make us lazy.

This is our last day in Kerala. After the treatment, I go and sit on the beach and watch the sunset seasoned with the movement of the clouds. As if this showed to me if I can live the things in the world like this, then a colourful, happy miracle will come out of my life, like the one the sun is painting now on the sky. Depending on Kṛṣṇa in theory seems to be difficult, painful, full of sacrifices but actually it gives unlimited happiness. Happiness that comes from our deepest, inner existence, and any other realisation is dwarfed, even if it experiencing any “Unity”, or coming home to any “Now”. How can you reach this realisation, enlightenment that lets us see things in their reality? I do not know the answer. I may know it in theory but in reality it means constant learning. All I know now is that I simply try to be grateful for my “miserable little life” and for everything I received so that perhaps once I will be able to give…