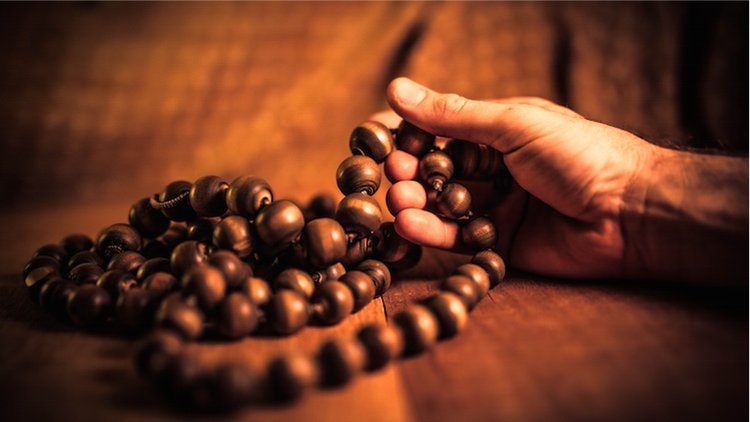 In western language, ‘mantra’ is a borrowed word of Sanskrit origin. One of its several meanings is ‘a series of sacred sounds’, which is a means, and the goal, of meditation. Mantra meditation represents the Vedic principle of cultivating knowledge, according to which only the complete harmony of theory and practice can be considered real knowledge. The mahā-mantra is the most perfect of the millions of bona-fide mantras, by which absolute knowledge can be acquired in this age. The following article describes the appearance of themahā-mantra in our present age.

The mahā-mantra is a garland made of the holy names of God. The Lord’s holy name (hari-nāma) is completely spiritual, as unanimously stated by Vedic scriptures. In other words, it is not of this material world, but comes directly from the Supreme Lord, being one of the forms of His internal potency. Its history dates back to its appearance in the material world as early as the time of creation. However, we will now summarize the most important events of its history from a date much closer and much more tangible for us.

Vedic scriptures call the present age, Kali-yuga, the age of quarrel. As is the case with each previous age, Kali-yuga also has its own unique process of self-realization. According to the unanimous opinion of scriptures, the only viable method is the chanting of the Lord’s holy names (samkīrtana), and its goal is to attain pure love of God (prema-bhakti).

Several of the Vedic scriptures speak of an incarnation of Lord Kṛsṇa named Caitanya who would bestow the gift of love of God upon everyone in the form of congregational chanting of the holy name. The color of His body would resemble molten gold, therefore He would also be known as Gaura (golden) or Gaurāmga (‘one whose body color is gold’).

When Lord Caitanya appeared in this world in the month of Phālguna (February-March) in 1486, it was a full-moon evening (p¡rṇimā). On such occasions it is the custom of the Hindu people to bathe in the Ganges and other sacred rivers and chant Vedic mantras for purification. These auspicious circumstances already foresaw Lord Caitanya’s special mission: the propagation of the chanting of the Lord’s holy names in this age of Kali.

After having been initiated by one of the great ācāryas of the Vaisṇava disciplic succession, ¾ªvara Puri, Lord Caitanya began to propagate the method of self-realization prescribed for this age. Since His preaching was very successful, many became envious of Him and brought the matter before the Muslim city magistrate, Chand Kazi. The magistrate gave orders to stop the samkīrtana. Lord Caitanya then organized a peaceful procession, a civil protest that was joined by nearly a hundred thousand people. The huge crowd went to the Kazi’s house, chanting Lord Kṛsṇa’s holy names: Hare Kṛsṇa Hare Kṛsṇa Kṛsṇa Kṛsṇa Hare Hare Hare Rāma Hare Rāma Rāma Rāma Hare Hare. The magistrate agreed to meet the Lord. Citing the Vedas and the Koran, Lord Caitanya managed to convince the Kazi, who became His follower and gave orders that no one should ever again interfere with the samkīrtana movement.

At the age of 24, Caitanya Mahāprabhu gave up all His worldly responsibilities and fully devoted His time to spreading the Lord’s holy name. He organized a several-year-long South Indian tour, and made everyone He met His follower. The most renowned and learned sages and scholars of the age accepted the Vaisṇava faith propagated by Him, and encouraged many disciples to also take it up. Soon the whole of the Indian subcontinent was flooded by the nectar ocean of the holy name.

The next huge wave of hari-nāma left India’s shores in the 19th century. In 1896, ś rīla Bhaktivinoda çhākura, who was the first to write books in English on devotional service to Lord Kṛsṇa, made three predictions:

– “A personality will soon appear, and he will travel all over the world to spread the teachings of Lord Caitanya.

In the same year that Bhaktivinoda Thākura sent his book in English to universities overseas (1896), ś rīla A. C. Bhaktivedanta Swami Prabhupāda was born in Calcutta, and soon fulfilled these predictions.

śrīla Prabhupāda was initiated by Bhaktivinoda Thākura’s son, śrīla Bhaktisiddhānta Sarasvatī çhākura, and, inspired by his guru and his guru’s father, dedicated his life to spreading Lord Caitanya’s message all over the world. He first wrote purports to the Bhagavad-gītā, then in 1944 began a bi-monthly magazine in English entitled Back to Godhead, which he edited single-handedly. The magazine has been in continuous publication ever since, and it is now published in countries all over the world in an increasing number of languages.

In 1965, ś rīla Prabhupāda set out to America to fulfill the desire of his spiritual master, and in just over ten years he created a worldwide spiritual organization. He opened more than a hundred temples, founded schools, and created self-sufficient farm communities, all while relentlessly translating and writing purports to the philosophical and religious classics of India. His works make up more than sixty volumes. He was empowered by his deep humility and his complete devotion to the desire of his spiritual master and Lord Caitanya to spreading the chanting of the holy names of the Lord and devotional service to Lord Kṛsṇa on the whole planet.

Lord Caitanya wrote only 8 verses, a brief but indepth treatise on the holy name, which he wrote in the form of a poem called śiksāstaka:

Let there be all victory for the chanting of the holy name of Lord Kṛsṇa, which can cleanse the mirror of the heart and stop the miseries of the blazing fire of material existence. That chanting is the waxing moon that spreads the white lotus of good fortune for all living entities. It is the life and soul of all education. The chanting of the holy name of Kṛsṇa expands the blissful ocean of transcendental life. It gives a cooling effect to everyone and enables one to taste full nectar at every step.

My Lord, O Supreme Personality of Godhead, in Your holy name there is all good fortune for the living entity, and therefore You have many names, such as “Kṛsṇa” and “Govinda,” by which You expand Yourself. You have invested all Your potencies in those names, and there are no hard and fast rules for remembering them. My dear Lord, although You bestow such mercy upon the fallen, conditioned souls by liberally teaching Your holy names, I am so unfortunate that I commit offenses while chanting the holy name, and therefore I do not achieve attachment for chanting.

One who thinks himself lower than the grass, who is more tolerant than a tree, and who does not expect personal honor but is always prepared to give all respect to others can very easily always chant the holy name of the Lord.

O Lord of the universe, I do not desire material wealth, materialistic followers, a beautiful wife or fruitive activities described in flowery language. All I want, life after life, is unmotivated devotional service to You.

O My Lord, O Kṛsṇa, son of Maharaja Nanda, I am Your eternal servant, but because of My own fruitive acts I have fallen into this horrible ocean of nescience. Now please be causelessly merciful to Me. Consider Me a particle of dust at Your lotus feet.

My Lord Govinda, because of separation from You, I consider even a moment a great millennium. Tears flow from My eyes like torrents of rain, and I see the entire world as void.

Let Kṛsṇa tightly embrace this maidservant who has fallen at His lotus feet, or let Him trample Me or break My heart by never being visible to Me. He is a debauchee, after all, and can do whatever He likes, but still He alone, and no one else, is the worshipable Lord of My heart.

*I changed the translation the author had here as it was incomplete; this is directly from Caitanya-caritamrta.