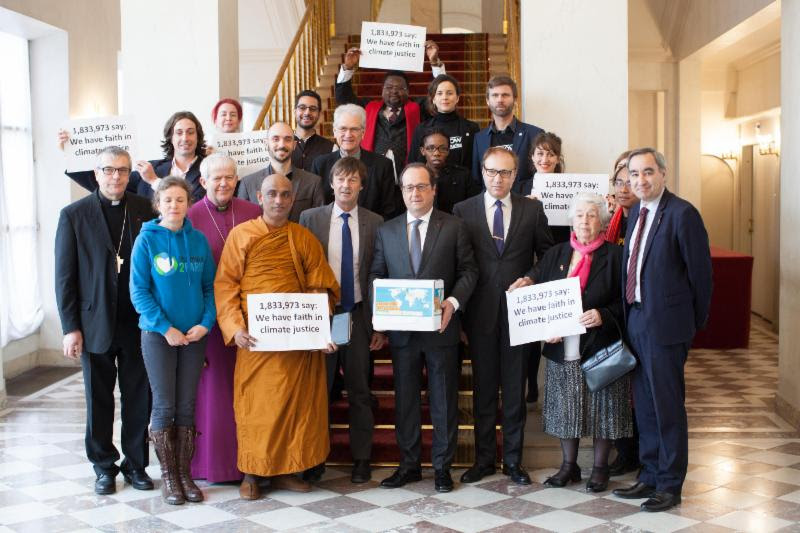 The President of France, H.E. Francois Hollande, today praised the efforts of campaigners and faith leaders who personally delivered to him a collection of petitions containing over 1.8 million signatures calling for climate justice.
H.E. François Hollande received the international petitions at a special reception held at the Presidential Palace in Paris. They were presented by a delegation that included Dr. Ghaleb Bencheikh, President of Religions for Peace-France; the Philippines’ leading climate activist Yeb Saño; Bishop of Salisbury (UK), the Rt. Rev. Nicholas Hulot; and Auxiliary Bishop of Brasília, the Most Rev. Leonardo Steiner.

At the ceremony, Mr. François Hollande thanked the group, and spoke of the importance of bringing together religious leaders of all faiths to protect the world’s “common heritage”. He reminded the inter-faith group that the primary role of the conference negotiators was to “deal with the future of the planet.” He told them: “It is a responsibility that we can’t walk away from…. Your message, your petitions, must be heard, and this voice you’re bringing, must be listened to.”
Climate pilgrims from across the world were represented by Yeb Saño, leader of the People’s Pilgrimage and an ambassador for OurVoices. He told the President: “As a way to express faith communities’ deep sense of urgency regarding the climate crisis, we embarked on pilgrimages from all over the world…. As pilgrims we walked and cycled together out of sense of justice, love, faith and hope that we can build a better future together. We are honored to be walking with you on this journey.”
On behalf of ACT Alliance, the Rt. Rev. Nicholas Holtam explained why the groups had united to call for a fair and ambitious deal. He remarked: “People of all faiths urge all partiers to agree on a Paris deal applicable to all. Following the acts of terrorism in this city we want the world to act together, in care of our common home.”
Representing the Global Catholic Climate Movement the Most Rev. Leonardo Steiner, Secretary General of the National Conference of Bishops of Brazil, voiced his solidarity in the wake of the Paris attacks and highlighted the success of the petition campaign.
Dr. Ghaleb Bencheikh, President of Religions for Peace-France, spoke about the need to work for an end to conflict, in order to “build a future with a sound environment for mankind”. He said: “Religious tradition brings hope within misery. Now we are facing a climate challenge, we are acting for peace and for the future of mankind.”

He then said to the President: “We admire you for what you are doing because, under your auspices, we hope that this negotiation will bring about a future for coming generations.” To watch the full speeches, click here.

Mme. Jacqueline Rougé, Honorary President of Religions for Peace and special representative of UNESCO, was also at the ceremony showing her support of the petition campaign.
Also present at the Paris ceremony were representatives from the Pan African Climate Justice Alliance, We Have Faith, the Lutheran World Federation, and the ‘Bhumi Project’ at the Oxford Center for Hindu Studies, as well as climate pilgrims from Britain, Scandinavia and Germany.
The petitions were originally presented to UNFCCC Executive Secretary Christiana Figueres and the French President’s Special Envoy for the Protection of the Planet, Nicolas Hulot, on November 28 in Saint-Denis, northern Paris. Delivering the opening remarks today, Mr. Hulot told the delegation: “The President did not hesitate at all to receive you, as you bring the fruits of your pilgrimages.”
Earlier, on 8 December, World Council of Churches General Secretary and Co-President of Religions for Peace, Rev. Dr. Olav Fykse Tveit, addressed the High Level Segment of COP21. “We believe that you will serve the world by showing the best of human creativity and capacity”, said Rev. Tveit. He further pointed out that COP21 is “the right moment for real and visionary leadership, and it is an irrefutable moral duty for all governments to agree on concrete and measurable steps towards global climate justice and partnerships for climate resilience.” For full speech, click here.
Religion for Peace >>
About the four networks who organized the petitions:
Religions for Peace, established in 1970, is the world’s largest multi-religious coalition that works to advance peace.
ACT Alliance is a coalition of 137 churches and affiliated organizations: it runs the ACT Now For Climate Justice campaign.
OurVoices is run under the auspices of The Conservation Foundation in the UK and GreenFaith in the USA.
Global Catholic Climate Movement represents thousands of Catholics responding to the Papal encyclical.