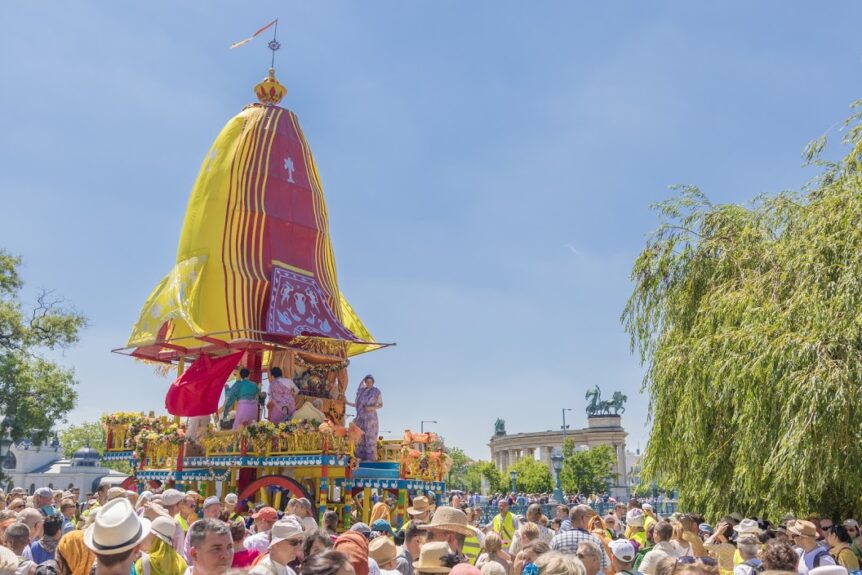 After the lockdown is lifted, the Krishna-believers organise the Festival of Chariots again on Saturday, 9 July. Two years were lost and now the organisers promise to have a huge party on Andrássy street, then at the City Park. They hope that the India Festival will be a real joyful event, which will have „peace” as its central motive.

Ratha-yātrā, the Festival of Chariots, is one of the most ancient and grandiose festivals of India which attracts almost 2 million people every year. For more than 50 years, the festival is also organised in many Western cities and for many years, it has become part of the scene in Hungary as well not only for the Hare Krishna devotees but also for the people of the capital.

The importance of the Festival
At the Indian Festival of the Chariots, the participants pull dancing and singing a large, colourful and decorated chariot all over the city. The chariot carries a particular form of God, Kṛṣṇa, called Jagannatha, or the Lord of the Universe. This form of the Lord is in a special mood in which opulence is not as prominent as His loving, playful attitude, and, by leaving His temple, He is spreading his blessings to all people who care to participate.

Participation at the festival symboically means that one is longing to go back to one’s original, eternal, spiritual home with God. The word “ratha” means both a chariot and the body, meaning that although the living being, the spirit soul is migrating from life to life, accepting a body after another (reincarnates), but the real purpose of life is to break out from this cycle and return home, to God. It is held that whoever pulls the rope of the chariot will be freed from the reactions of his earlier sinful deeds (karma) and is positively beneficial. 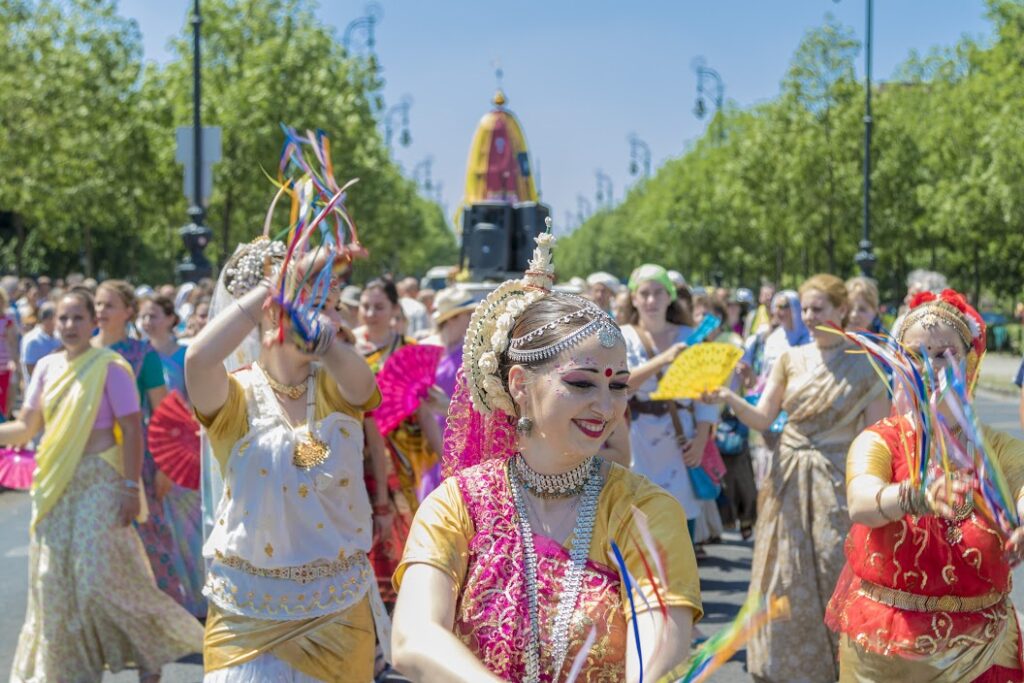 The original Indian Festival of the Chariots
For many thousands of years, in the Orissa state city of Purī a new set of three chariots are being made for the annual festival, the making of which starts on the most auspicious day of Akṣaya trītīyā in early May. There is no engine in the colourfully painted, ornamented wooden chariots, their locomotion is by human power. They have 18, 16, and 14 wheels and have the special form called yantra which resembles a small temple. They are of different height, therefore the participants can see from the distance which form of God is travelling on them.

At the event, the assembled devotees pull the carts from one temple to another, where the murti (statue) form of Kṛṣṇa will be guest for 10 days, then returns to His original temple. The journey is marked with important ceremonies.

The king of the state of Orissa, who retains his royal title even in today’s democratic India, not only participates in the festivities but he himself sweeps the road in front of the chariots, thus expressing that he considers himself to be the servant of God and his role and power invested in hum is but the instrument of his service.

Following the Festival of the Chariots the deities are placed back to Their original altar and the priests continue Their normal worship: dressing them daily, offer Them ritual ingredients and food preparations. The food preparations are made in a kitchen where the fire has been burning for thousands of years without ever being extinguished. The food thus made and offered feeds several thousand people every day. The worship is done by the descendants of such families which installed the deities in this temple in the 12th century and this service is passed down from generation to generation as a kind of eternal duty. 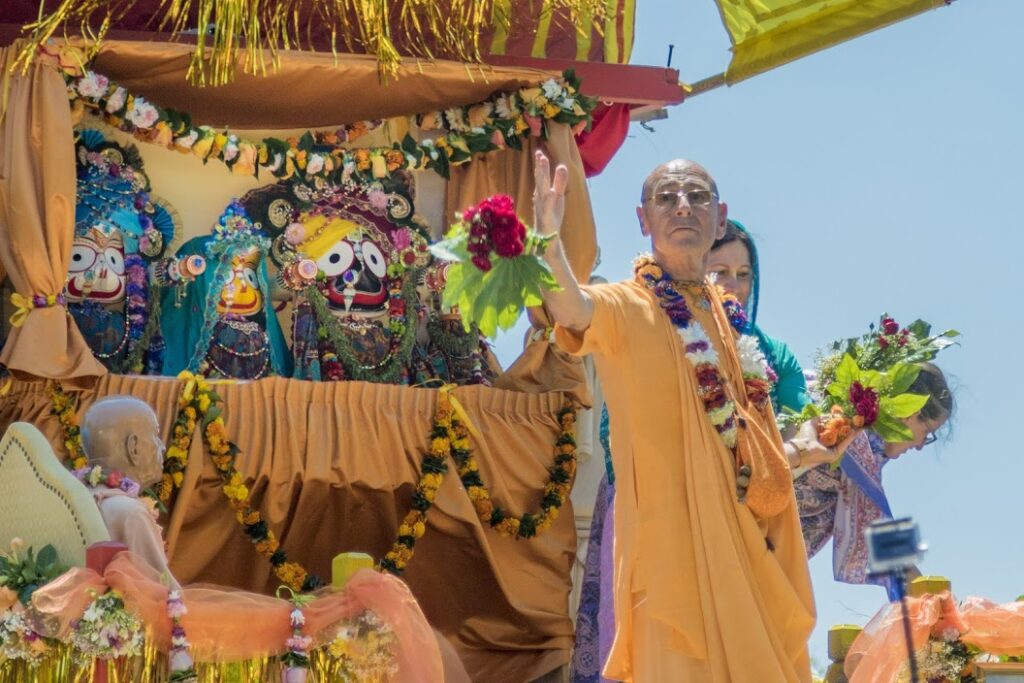 The tradition in the West
This tradition planted in the West by the extraordinary spiritual master, A. C. Bhaktivedanta Śrīla Prabhupāda, who is the founding ācārya of the Hare Kṛṣṇa movement.  He organised the first festival in 1967 in San Francisco. In the West the festivals with a few thousand people usually pull just one chariot. The festive procession thorugh the city is led by colourfully dressed dancers, and is accompanied by musicians, drummers and loud singing. Anyone, without any condition, may join the jolly procession and have fun!

In Hungary the festival will be held in Budapest on 9 July. The proession starts from Vörösmarty tér at 1am and is expected to arrive in the City Park at about 1pm, where an Indian Festival will be held well into the night. There will be a bazaar, cultural programmes, yoga presentations and workshops, spiritual and self-awareness talks. There will be a real Mandir tent, where the participants can encounter with the Lord of the Universe. There will be oriental style jamming, vegan delicacies, Indian sweets and savories, book stalls, henna painting and many other things to see and to do for the whole family.

Vasudhaiva kutumbakam
The leading motif of this year’s Festival of the Chariots is peace and the feeling that we are all members of one large family. The Kṛṣṇa devotees want to call the attention to that with the passing time, we may become indifferent to the crises and conflicts taking place in our environment, even in our neighborhood. We have to understand, though, that we can only become really happy if all people and all living beings are safe and happy. Our real inner nature spans over nations, religions and ideologies and understanding this makes us really human. In the conflict in our neighborhood humans are fighting humans, souls against souls, which is unacceptable. Complete spiritual bliss is the real nature of the spirit soul which can only be attained if we understand our spiritual nature behind the external appearances, if we get into contact with God, and if we are able to regard all as our borthers and sisters in His beloved family. As part of the India Festival the devotees will organise another musical peace meditation in the City Park from 3:30- to 5pm.

Here is a map of the route: https://www.google.com/maps/d/u/0/edit?mid=1OURnG6vx9TpSg0fi6WQI58ei390JT5Jc&usp=sharing

If you wish to offer some nice services or donation for the smooth running of the festival, please write to us to info(at)krisna.hu

Anyone is welcome to bring fruits, unsalted natural nuts, flowers or vegan cakes before the departure. Later on, after they have been offered, they will be available in the so-called MAHA TENT in the City Park. This is a nice way to satisfy the Lord of the Universe.

Participation at the programme is free of charge,  everyone is welcome!

What was the last Festival of the Chariots like in 2019? Get the feel from the video Krishna News! >> 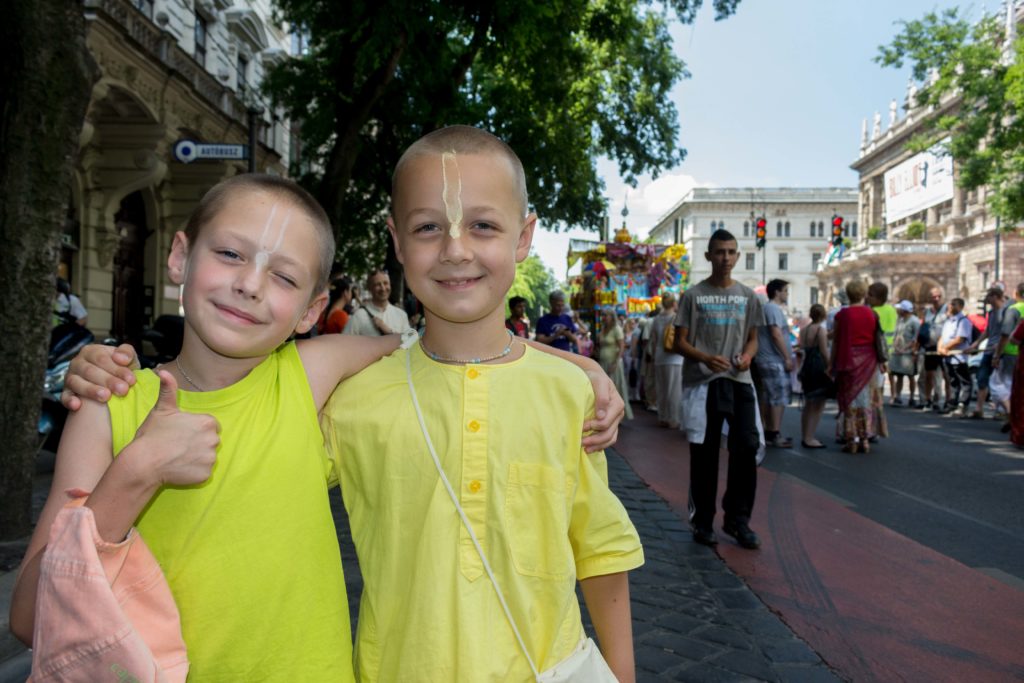 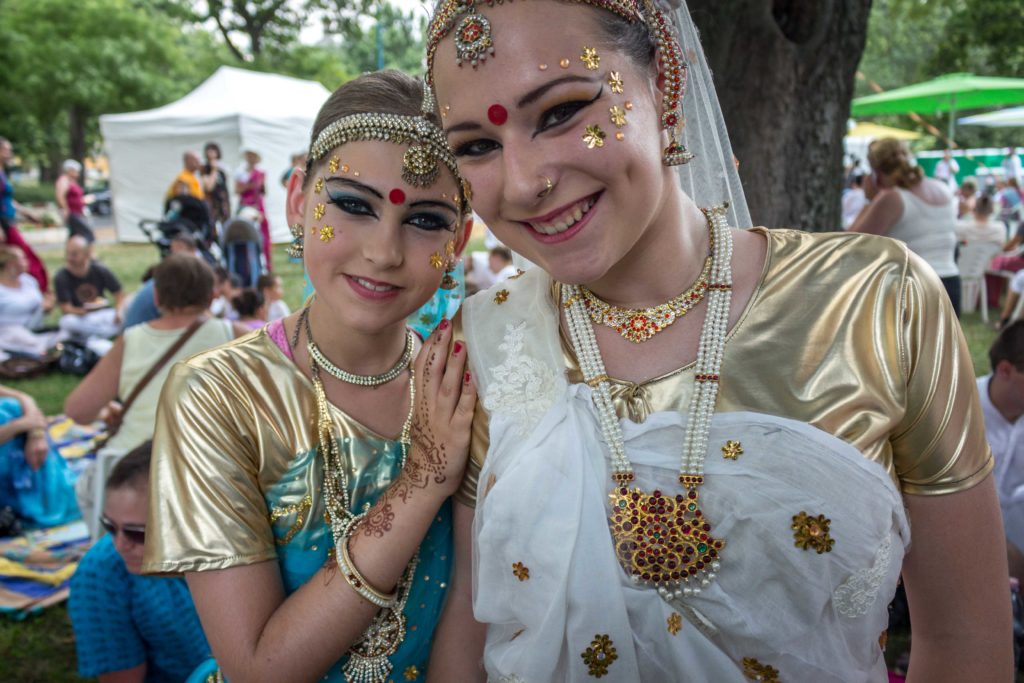 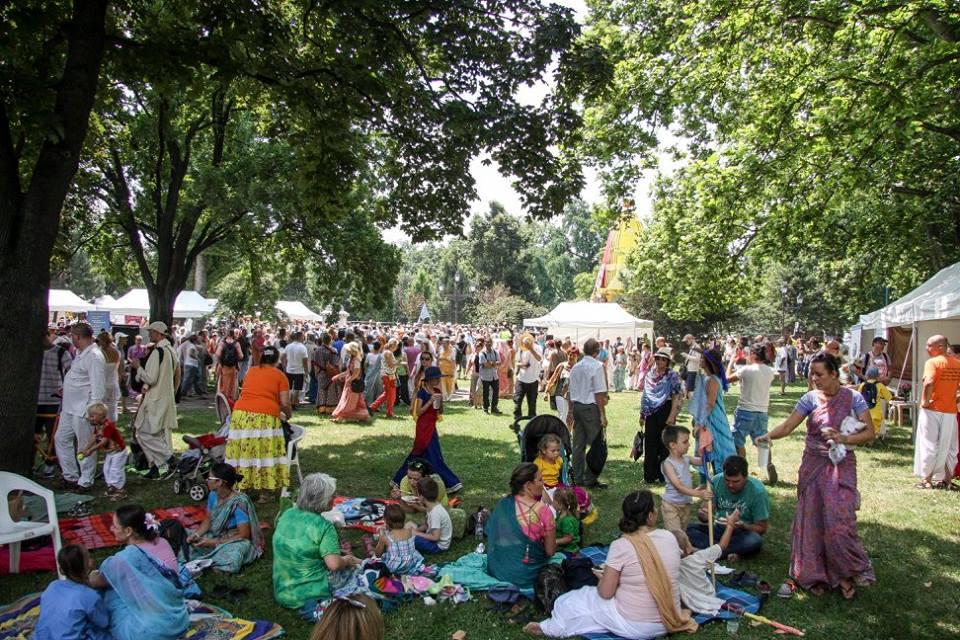